VANCOUVER, Jan. 19, 2016 /CNW/ – Most of the 2.8 million Canadians with a rare disease experience extraordinary and unnecessary barriers getting the right diagnosis, specialist, and treatment. On the eve of Canada’s Health Ministers’ meeting in Vancouver, the Canadian Organization for Rare Disorders (CORD) and the Economic Club of Canada convened a panel calling for the immediate implementation of Canada’s Rare Disease Strategy. This would immediately provide Canadians with rare diseases the same access and quality of healthcare available to those with common conditions like cancer, heart disease and diabetes. 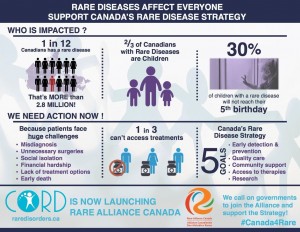 Launched last May, on Parliament Hill, the Strategy calls for national standards for newborn screening, centres of expertise, sustainable access to treatments and dedicated funding for rare disease research.

“We have crafted a Strategy that is both ambitious and achievable,” said Durhane Wong-Rieger, President and CEO of CORD. “Canadian strategies for cancer, heart disease, and diabetes have significantly improved quality and longevity of life,” specified Wong-Rieger. “More than 30 other countries have national rare disease plans. With respect to drugs for rare diseases, patients have been waiting for over a decade for the national plan that was promised by Health Ministers in 2005. But we are hopeful that these Health Ministers will announce concrete steps towards fulfilling that commitment.”

Nicklas Harkins, a 20-year-old from North Vancouver and student at UNBC in Prince George, was diagnosed with a rare disease (MPS I) at the age of five.  Speaking at the event, Nicklas said, “Ten years ago, my parents and I, along with many other families, rallied at a similar Health Ministers meeting so that all Canadian patients with MPS I could access the same life-altering treatment I was receiving. We knew treatment would make the difference between progressive loss of mobility, hearing, and sight and a normal life.  We were all thrilled when the Health Ministers agreed not only to fund the therapy, but also to bring in a national rare disease drug plan. Today, I am happy to be proof that the drug works, but I am also sad that rare disease patients are still standing in picket lines and appealing for live-saving treatment on a case-by-case basis. I urge the Health Ministers to honour their promise made in 2005 and provide other Canadians with rare diseases the same chance for life.”

Fred Horne, former Alberta health minister and Adjunct Professor at the University of Alberta School of Public Health, moderated today’s event. “It’s time for Canada to catch up with other countries and recognize that access to rare disease therapeutics is part of mainstream healthcare. Canada’s Rare Disease Strategy is a plan that we can implement now.”

Robin Sherrington, Senior VP Business and Corporate Development, Xenon Pharmaceuticals Inc., provided a perspective from the pharmaceutical sector. “Entrepreneurs, scientists, governments and investors, must embrace a Rare Disease Strategy that not only advances development and approval of innovative treatments but also assures access, which ultimately improve the lives of all patients and generates economic opportunities.”

About the Canadian Organization for Rare Disorders (CORD)

Image with caption: “The Canadian Organization for Rare Disorders (CORD) is urging Federal, Provincial and Territorial Health Ministers to implement a Rare Disease Strategy to give equal care and treatment to patients with rare diseases. (CNW Group/Canadian Organization for Rare Disorders)”. Image available at: http://photos.newswire.ca/images/download/20160119_C7808_PHOTO_EN_601154.jpg