TORONTO (Sept. 11, 2015) – The Canadian Association of Pompe (CAP) today submitted a nomination for Pompe disease to be considered for addition in Ontario’s newborn screening panel. In recognition of Newborn Screening Awareness Month, CAP urges Newborn Screening Ontario to expand its program to include this rare neuromuscular condition. Without early diagnosis and treatment, infants with this rare genetic illness are not likely to survive past the age of one.

“Infant-onset Pompe disease is the most aggressive form of this disorder, and eliminating the time required for diagnosis can be a life-saving choice, and certainly affects quality of life,” said Brad Crittenden, the President of CAP who lives with Pompe disease. “As infant-onset Pompe patients are so severely affected, we unanimously support screening in Ontario and across Canada for this devastating disease. It’s so crucial for these patients to receive timely treatment, and newborn screening can help ensure that happens. 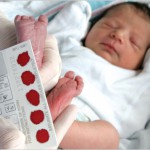 Pompe disease causes progressive, debilitating, and often life-threatening muscle weakness, often affecting the heart, skeletal muscles, respiratory, liver and nervous systems in people of all ages. Since Pompe disease is rare, and the signs and symptoms can mimic other disorders, the disease is often overlooked and diagnostic delays are common. Early diagnosis and treatment of infants with Pompe disease is critical and can save lives.

Infant-onset Pompe disease can be treated with enzyme replacement therapy (ERT), which addresses the underlying cause of the disease. However, in Ontario and across Canada, babies are often not diagnosed until they show severe symptoms, as newborn screening for Pompe is not yet available. Adding Pompe disease to Ontario’s newborn screening program will allow infants to be diagnosed and receive treatment immediately after they are born.

“Newborn screening is becoming one of the most important ways of identifying genetic disorders, many of which, if they were caught, could be treated from birth, preventing premature death and irreversible damage,” said Durhane Wong-Rieger, President and CEO of the Canadian Organization for Rare Disorders. “Newborn screening is a part of public health in every developed country and we call upon Canada to include more disorders, especially those where there is a treatment option available.”

Newborn (or neonatal) screening aims to identify infants with serious, treatable disorders, so as to facilitate appropriate interventions to prevent or decrease adverse outcomes, such as developmental delay, serious disability or death. Conditions that are typically recommended for Ontario’s newborn screening panel are those that can be detected soon after birth by a reliable test, and are likely to benefit from early diagnosis and treatment.

Newborn screening for Pompe disease currently takes place in Taiwan, as well as in the United States, specifically through pilot programs in Illinois, Washington and Missouri. Earlier this year, the U.S. Secretary of Health and Human Services added Pompe disease to the Recommended Uniform Screening Panel (RUSP). It is expected that states will take between one and five years to implement this new screening recommendation across the U.S.

Pompe disease is a rare genetic multi-system disorder, caused by a mutation in the gene that makes acid alpha-glucosidase (GAA), an enzyme that breaks down glycogen, a sugar that is stored in muscle cells. Pompe disease can occur between infancy and adulthood, and affects both men and women equally. Approximately one-third of people with Pompe disease are infants (infant-onset) while the other two thirds are children or adults (late-onset). It is estimated that Pompe disease occurs in one in 40,000 live births worldwide, and between 5,000 and 10,000 people live with symptoms of the disease.

Enzyme replacement therapy treats the underlying cause of both infant and adult forms of Pompe disease by replacing the missing or deficient GAA enzyme. ERT has been shown to reverse cardiac muscle damage and enhance life expectancy in those with the infant form of the disease.

The Canadian Association of Pompe (CAP) is a non-profit group representing Canadian families affected by Pompe disease. CAP was established to help persons in Canada, and elsewhere, become familiar with Pompe disease, and to support persons living with this disease. As part of this mandate, CAP is advocating for the addition of Pompe disease to newborn screening programs across Canada. CAP is a member of the Canadian Organization for Rare Disorders (CORD). For more information visit www.pompecanada.com.