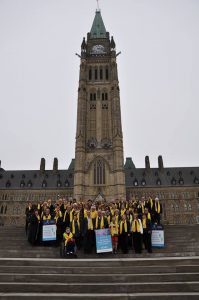 On March 9th and 10th, 2016 members of the Canadian Organization for Rare Disorders decended on Ottawa for their annual meeting and Awards Gala.

Yellow scarves were distributed to mark the occasion and in a very, very rare show of solidarity Members of the House of Commons donned these scarves to recognize the reading of a statement on Rare Disorders by one of their own.

In conjunction with this Rare event an Awards Gala was held to recognize accomplishments of some in the Rare Disease Community. Awards were given out in a variety of categories some of note including the Volunteer Award to John Adams and the Youth Leadership Award to Jonathan Pitre. I had the opportunity to be seated at a table for dinner with Dr. Clara van Karnebeek co-winner of the Scientific Leadership Award and a very impressive person she was. Here is a picture of the winners with Durhane Wong- Rieger, President & CEO of CORD.

The conference included discussions on many topics. It was clear that a lot has been accomplished on the Rare Disorders front but unfortunately there is still along way to go to make sure that people who suffer from rare disorders in Canada receive fair and equitable treatment to those more common afflictions. Many more photos from the event can be seen on the CORD Facebook page.