Trevor was a floppy baby, what I mean by this, is he felt like one of those dolls that are full of water. He had the weight but no muscle tone. His skin felt like velvet. He could not bare weight on his legs they would buckle under him.
I took Trevor to the doctor, we were sent to a specialist. The specialist thought Trevor had Duchenne Muscular Dystrophy, a muscle biopsy was ordered. The muscle was examined and with what was seen a second muscle biopsy, skin biopsy, and liver biopsy was ordered. Half of everything was sent to the United States to be examined. The result came back that Trevor had, Pompe Disease, Trevor was ten months old. 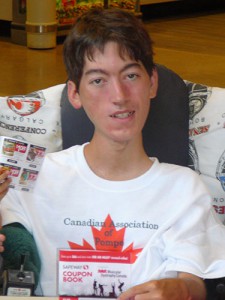 I was told Trevor would never sit, stand, walk or possibly never hold his head up and would probably not see his second birthday. With this being said, I brought Trevor home. I exercised Trevor’s tiny body several hours per day soon he was holding his head up. He began to be able to bare weight on his legs and then could sit by himself.

I modified a ride on car so he could sit in it and move his legs and follow me around the house. It worked like a walker but was a car. This helped make his legs stronger so eventually he would be able to walk. Trevor walked at about two years old as most kid walk when they are around a year.

When Trevor was five years old the Children’s Wish Foundation of Canada granted him his wish of a computer. With this computer is the first time I had hope that maybe I would be able to save Trevor’s life. I found out there were companies working on a treatment for Pompe Disease. I made phone calls and wrote letters to see if I could get Trevor on one of the trials. I had no success.

Trevor attended school with a full time nurse by his side. He needed help with almost everything he did at school and at home. Trevor accepted every hurdle that was given to him as a challenge and mastered it. Living with a failing body never fazed him he just carried on and enjoyed life. Trevor even managed to attend two years of College until the H1N1 flu bug hit then I pulled him for his safety.

Life carried on with many hurdles and hospitalizations. At the age of thirteen Trevor started to decline very fast. He ended up in a wheelchair. At that point ERT (enzyme replacement therapy) was permitted to cross the boarder and Trevor started to get an infusion every other week. At this point Trevor was on a trial and Genzyme was supplying the Enzyme. After four years on the trial the Alberta Government agreed to fund the treatment. ERT has slowed the progression of Pompe Disease enough that Trevor is now twenty-two years old and goes to every concert and sporting event that he can fit in.