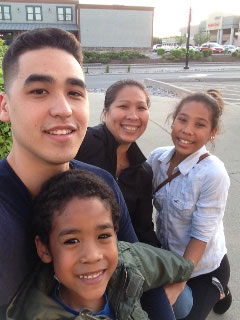 Noah is a six year old boy living with Pompe Disease. He was diagnosed at the age of two years old.

Before Noah was diagnosed, he would often get ear infections, which would eventually escalate to pneumonia, requiring frequent visits to the clinic. Even after antibiotics his congestion persisted. He finally ended up in the hospital and was diagnosed with RSV (Respiratory Syncytial Virus). Noah was quickly hooked up to an IV unit where they administered the antibiotic to clear his RSV. When he was still congested, the doctors ordered for Noah to be suctioned. When that did not work either, it prompted the doctors to do blood tests. Those blood tests would also come back negative. 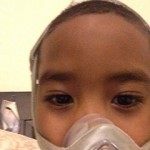 During a routine check from one of the doctors on call she noticed that Noah’s stomach was distended, which prompted her to order an ultrasound. The ultra sound not only revealed that Noah had an enlarged liver but his heart was also enlarged raising questions to why this would happen and was it a result of his congestion not being cleared up. With this result, they knew that they were not just dealing with RSV but something else. They ordered several blood tests, cycle cell, celiac disease and the list goes on and on, but all came up negative.

After a week of blood work and no answers, Noah was transferred to Sick children’s hospital in Toronto.

After a three week stay and much tears and unanswered questions as to why Noah had an enlarged liver and heart, the Doctors finally sat me down to deliver the news that Noah was diagnosed with a rare condition called (Infantile) Pompe Disease. The news was a bit overwhelming because the entire room was filled with not only the metabolic team but also the respirology and cardiology teams. 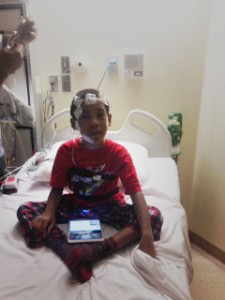 After learning that Noah had Pompe Disease, I immediately quit my job to become his sole caregiver.

The metabolic team immediately started Noah on enzyme replacement therapy because he was starting to lose the mobility in his legs. Two weeks after receiving his first infusion, Noah had surgery to have a Port A Cath inserted in order for him to continue receiving the Myozyme without having to be poked every other week. Then within two months, Noah had to undergo another surgery to have a tonsillectomy as his tonsils were obstructing his airway causing Noah to rely on oxygen to breathe.

Having a six year old living with Pompe comes with many challenges. Visiting the day unit every other week for his infusion. Speech therapy due to the weak muscles causing Noah to have a speech impediment, not to mention, physiotherapy as well as occupational therapy. Then there are subsequent visits to the cardiologists as well as the respirologist and the metabolic geneticist. Just simply going up or down the stairs is a struggle for Noah. Getting on and off the bathroom seat, going in and getting out of the bathtub. Things we take for granted poses a challenge for Pompe patients.

Today Noah is on a BiPAP machine during the night, he also uses a wheelchair for energy conservation.

Since Noah has been receiving Myozyme from the time he was diagnosed until now, four and a half years later, his life has improved or rather remained stable. Even though it is with limitations, Noah is able to ride his bike and participate in school.

In conclusion, had Pompe been included in Newborn screening, it would have eliminated some of the struggles that we had to endure to be diagnosed. 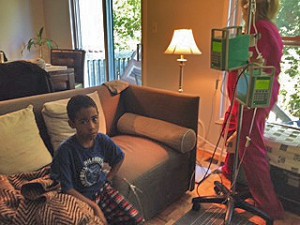 We’re happy that Noah has been receiving home infusions for almost three months now. He’s the first child in Canada to receive home infusions for Pompe disease. He’s also recovering well from surgery to open up his airway for better breathing. Despite these challenges, Noah is progressing well and is an awesome 7 year old.