After my daughter was born in 1992, my physician discovered that I had extremely high Creatine Kinase (CK), levels. His first instinct was that it was liver disease. Although I had a liver biopsy, nothing was found. Specialists continued to follow me for the next nine years. Then, one day I started falling for no reason. My legs would just give out. I alerted one of the specialists in case these new symptoms might be linked with a possible diagnosis. I was immediately referred to a neurologist who ordered a muscle biopsy. At the same time, I had been referred to a metabolic specialist. Both physicians arrived at the same diagnosis on the same day. It was then 2002 – ten years since the first attempt to diagnose my condition. The metabolic specialist informed my husband and I that there was no cure for the very rare disease I had and that I was terminal, with approximately two years to live. During those two years, I was told that I would likely become wheelchair bound in the first year and require a tracheotomy to breathe shortly after that as the disease impacts the ability to breathe. Without treatment, this is the prognosis for most Pompe patients. 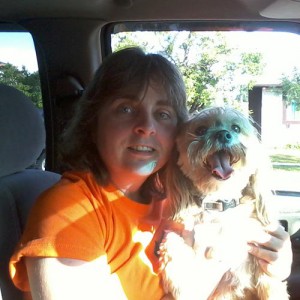 However, I was also informed of a possible treatment –one that wouldn’t cure the disease but would slow or even halt its progression. Since it was an experimental therapy (Myozyme), I didn’t qualify for it and so had to wait until it was approved by Health Canada and there was assurance that the government would cover the cost. So I simply had to wait it out and hang on.

Because I didn’t want my husband to raise our young daughter on his own in the city, we sold our home and headed to a small Alberta town. I was falling more often and having breathing issues. However, I continued working, adapting my job to make it handicap friendly. Finally, in March 2010, I was eligible for Myozyme. Enzyme replacement therapies are delivered via an infusion process that requires me to be at a Calgary hospital all day every two weeks. I began the series of infusions.

Once on Myozyme, the progression of my disease stopped and I started to get my energy back¬an incredible feeling! After each infusion, I have so much more energy and can get more accomplished. Little by little, I have been getting my life back and setting new goals.

The first goal was to stay alive for my daughter’s high school graduation. Accomplished! The next is to see my daughter graduate university next May. Thanks to Myozyme, I will then set my next goal.